Dreams Desert Knight was born on July 7, 2006 at Rainbow Ridge Farm. His sire is DC Reoccuring Dream and his dam is Cheyenne Rizngstar H. Dream began his show career at 2 1/2 months of age at Blue Lakes Farm in Newbury, Ohio where he competed against many different breeds and ages of horses and ponies. He was shown in a series of 8 shows (1 per month) and entered in a total of 24 classes under 8 different judges. He placed in 22 of the 24 classes. He was a grand champion halter horse at 7 months old and the series high point halter horse at 10 months of age. He is the youngest horse and the first appaloosa to win this honor in the 16 year history of the series. 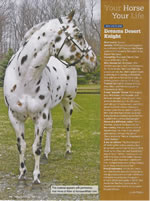 Read the “Horse and Rider Article”

Dream is now a beautiful 5 year old stallion. He has continued to win many honors including several grand and reserve championships, a Certificate of Acheivement and a Superior Certificate of Achievement in the Appaloosa Competitive All-Breed Program (ACAAP). In August 2009, he earned his second high-point halter championship at Twin Pines Stable in Newbury, Ohio, where he placed first in every class under several different judges. In May 2011, he earned his third high-point halter championship at Blue Lakes Farm in Newbury, Ohio.

Dream has earned the Masters Award in Halter from the Appaloosa Horse Club for 2009 and again in 2010. He earned this award by competing in open shows against all breeds of horses. He was awarded merits by the ApHC based on his placing in the open shows. He then competed against all other Appaloosa horses in the world that were entered into the ACAAP program. This is a great honor for our wonderful stallion, Dream, to win this award for a second time. To our knowledge, Dream is the only appaloosa to bring this prestigous award to Ohio. See a recent photo of Dream in the Photo Section.

Dream is taking the summer of 2011 away from shows. He is in intensive training for western pleasure and is doing very well. We are looking forward to showing him in performance classes in the near future.

This site uses Akismet to reduce spam. Learn how your comment data is processed.